What you do today will change your story tomorrow!

A Review of
The Tipping Point: How Little Things Can Make a Big Difference
By: Malcom Gladwell 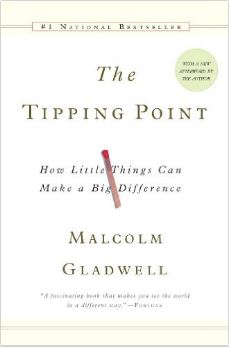 Just as the title promised, Gladwell explained how it’s the little things over time that make the difference and in the end cause the change to tip.  Despite being written in 2006, the basic ideas still resonated strongly with me and added to my perspective of how change comes to be in the world around us. As leaders, The Tipping Point reminded us to appreciate the people in our network and value the the small changes because in the end it’s more often the combination of small consistent changes that have shaped the world around us than large sweeping initiatives.

Gladwell skillfully uses real life case studies and stories to engage the reader in an interesting journey through the evolution of an idea.   He compared an idea to that of an epidemic.  One moment or perhaps for years it’s just an idea or how things have always been and then it hits the tipping point and everything changes. He referenced New York City’s drop in crime and why Paul Revere’s ride changed history and the other guy’s didn’t.  Did you know there was another rider that tried to warn of the British invasion?  By encouraging us to reflect on the world around us, Gladwell opened our minds to the possibilities of change and helped us understand why some ideas spread. He also noted the factors that help ideas catch fire.

It seems simple that good ideas will spread.  People get excited, they share their ideas and the effect ripples out.  It would be interesting to read an updated afterword by Gladwell based on the changes in social media in the last 10 years, but I imagine he’d say the same types of people still exist.  It’s just their medium and perhaps sphere of influence that has broadened.

“The success of any kind of social epidemic is heavily dependent on the involvement of people with a particular and rare set of social gifts” (p. 33).  That is the law of the few.  Gladwell explained that there are three key types of people in our world. Connectors, Maven and Salesmen.

Connectors are those in our networks that know lots of other people and their networks cross into many different types of social circles.  They enjoy bringing people together from different circles and introduce you.  Gladwell encouraged the reader to pause for a moment and think about your friends.  How did you meet them?  Who introduced you? More than likely, there’s one or two people that made those connections.   As an introvert, connectors are very important people to me.  They eliminate the need for small talk and connect you with people without requiring the extra energy it takes to meet strangers.  When you are brought together by a connector, you already have something in common to talk about.

Mavens are the “people we rely upon to connect us with new information” (p. 19) about specific topics. They are passionate about the topic they care about and you trust their advice. Just think about it.  Who’s your tech person?  Who recommends the best places to eat? Who do you ask when your car doesn’t work?  We all know mavens.  They want to share and they are often skilled communicators.

Lastly, Gladwell referred to the salesmen or those who are good at persuading.  Not only are they skilled verbal communicators, their body language seals the deal.  Interestingly, Gladwell mentioned the role of body language and the subtle ways these people exude persuasive body language.

Share your idea with one of these people and the chance of it spreading greatly increases, however, just sharing the idea won’t cause a word of mouth epidemic. He explained the message has to stick.  If people don’t remember it, they won’t share it.

What truly resonated with me, partially because the idea has come up in several other reads, was the power of context. People’s behaviour is reflective of the type of environment that’s been created.  It’s what he called the broken windows effect.  In short if we walk down a street with dilapidated old buildings, dark alleys, filled with garbage and lots of broken windows, we will act differently. The theory suggested that you will also see a higher violent crime rate.  Literally, clean up your streets and your crime rate will drop.

Filled with moving examples, Gladwell repeatedly draws the connections back to case studies and the complimentary research in a way that is sure to keep you turning the pages. It increases your awareness of the change happening around you and the next time something tips…maybe you’ll spot one of the reasons why.  Interestingly, Gladwell explained it’s not the huge changes that cause ideas to spread it’s the small, consistent actions that happen everyday that build into lasting change.

~ Thanks to Eric Hufnagel, Superintendent of Learning NESD, for recommending this book.